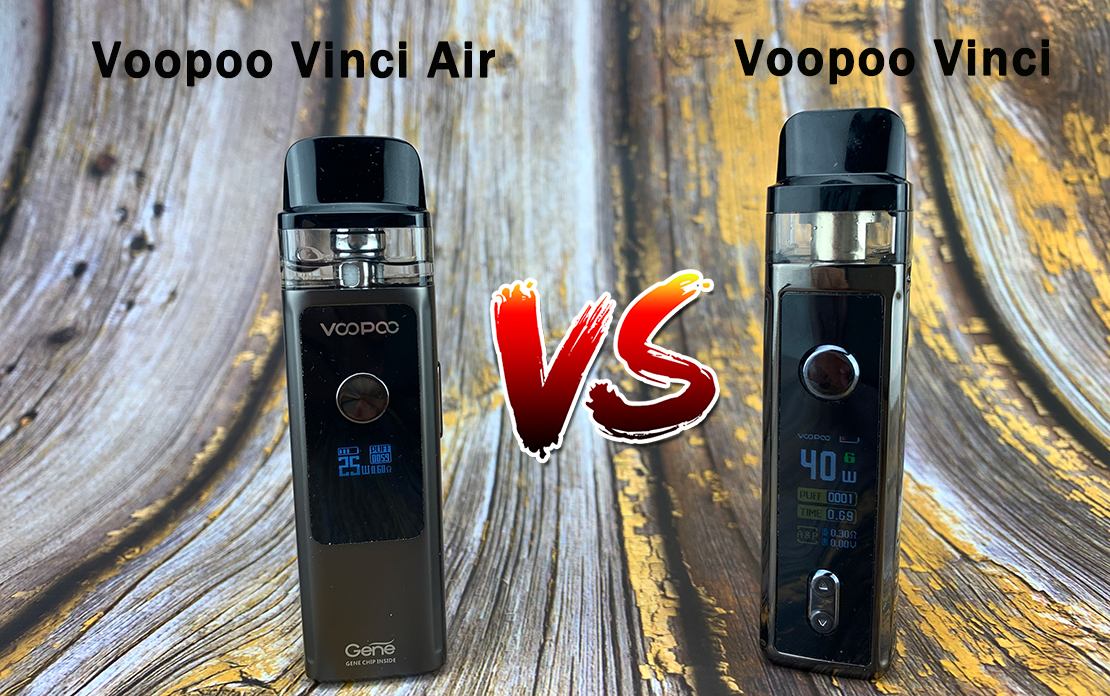 As its name told, the brand-new Voopoo Vinci Air Kit has become much smaller and thinner. Due to its size, the capacity of the internal battery has also been reduced to only 900mAh. Given that, the max output of this kit has been decreased to 30 watts. What goes around comes around, you want a small device, you have to give up something.

A small device does not deserve a big screen. So, Voopoo Vinci Air Kit just featured a teeny tiny screen display. Frankly, I'm not into a monochrome screen too much. Anyway, that's what it is exactly. The screen size is unknown by far, but the screen size of the Voopoo Vinci Kit is 0.96-inch, so you can have a detailed look at the screen comparison.

Due to its shape has been changed, so the pod cartridge has also been redesigned. The only difference between these two pods is the liquid capacity. The bigger one has a capacity of 5.5ml, the smaller one only features 5ml capacity.  Except for that, the rest of the configurations are pretty identical. The drip tip on the top is unremovable and the refill port is on the bottom side. And the connection is still magnetic, it's fairly strong as always.

Here is the very highlight of the new Voopoo Vinci Air Kit. Even though it also features a dual airflow system that allows you to rotate the pod cartridge to regulate the airflow abundance, the actual airflow regulation is more effective than the previous Voopoo Vinci Kit.

If you have used the Voopoo Vinci Kit already, you know what I mean above. You can adjust the airflow on Voopoo Vinci Kit, but the actual airflow abundance only allows you to do loose DL or restricted DL vaping.

From now on, you can do restricted MTL vaping on the Voopoo Vinci Air Kit. Exactly, you can do MTL and DL vaping at the same time on this kit, as long as you choose different airflow inlets.

Frankly, the actual performance of the new dual airflow system on the Voopoo Vinci Air Kit is pretty impressive. If you like MTL vaping and also want to try Voopoo Vinci series devices. This kit will be your one and only choice.

Of course, there're some similarities between these two kits, let me list them below.

That's it! I think I've covered everything! Hope you find it useful and look forward to your comment!