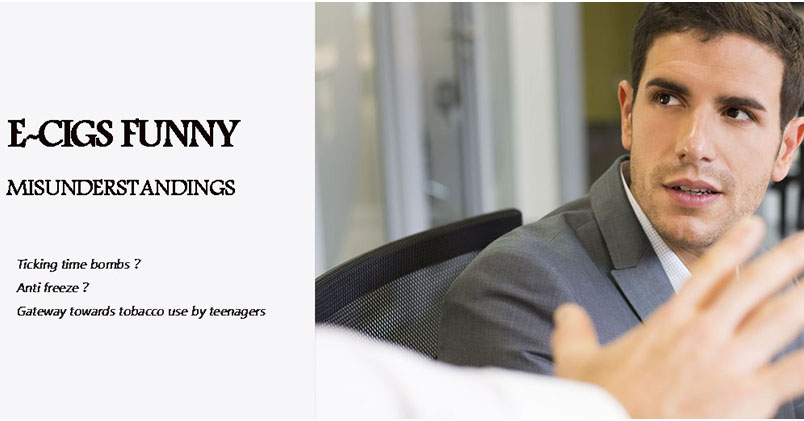 Let’s face it. Vaping remains a misunderstood subject even today where information is readily available not only from experts but from avid users too. These misconceptions have been found to arise from lack of knowledge or unwillingness to adapt to changes.Here are the top 3 funny misunderstanding of e-cig or vaping you never knew existed. E-cig batteries are ticking time bombs Over the past year, a renowned mobile phone maker was plagued by one of the biggest problems – exploding smartphones during charging. The reason for this was attributed to faulty rechargeable batteries. As a result, the smartphone model was banned from stores thus discontinuing it sale. That is not all. Users who owned the smartphone model were barred from traveling with them by air even though the smartphone was not faulty. This is actually in effect even today. When it comes to e-cigs, there are people who believe that rechargeable e-cig batteries are time bombs waiting to explode. This is a fallacy because the batteries have undergone safety testing thus ensuring that they are safe to use and carry around while in the e-cig. To ensure that you have the best brand, shop from reputable physical or online stores. E-liquid contains anti freeze If you have encountered e-cig users, you probably have been wondering how they are able to blow out vapor. Well, e-cigs use e-liquids. They are designed to accommodate and heat the e-liquid thus producing a vapor which is inhaled. The difference between smoke and vapor is that smoke is a by-product of burning while vapor is a by-product of heating. The e-liquid is usually drawn via the coil and heated. Four ingredients are used to formulate the e-liquid. They include – vegetable glycerin, flavorings, propylene glycol and nicotine (if needed). Propylene glycol is used in the formulation of anti freeze too. Its use in the e-liquid does not impact the user’s health negatively. All it does is to provide the same feeling like smoking a cigarette. Vaping is a gateway towards tobacco use by teenagers Today, many people especially parents are against vaping and e-cigs. The main reason is attributed to the likelihood of teenagers adopting the use of e-cigs which acts as a gateway towards tobacco use by teenagers. What most parents are not aware of is that in most schools around the nation, tobacco harm reduction education is effective. As a result, teenagers are well equipped with knowledge that helps to ensure they understand the risks of smoking. According to a 2013 study conducted by the University of Oklahoma Health Sciences, researchers found out that out of 1300 students, 43 students confirmed e-cigs as their first nicotine encounter. Out of the 43, only one student confirmed that e-cigs prompted the smoking of regular cigarettes. Final Thoughts To many e-cig users, the above misconceptions are not only fallacies but they are funny and ridiculous too. What most users need to know is that e-cig batteries are not ticking time bombs, they don’t contain anti freeze and they don’t promote the smoking of regular cigarettes among teens.
← Previous Next →
0 Comment(s)
Categories
Recent Posts
What's the Difference Between Smok Novo X and Smok Novo 2?
Freemax Maxus 200W Kit Review | Flavors Dance Around
Voopoo Drag X Kit Review | Beauty and The Vape
Smok RPM160 Kit Preview | More Than Powerful
Justfog Minifit Max Kit Review | Still Worth Buying?